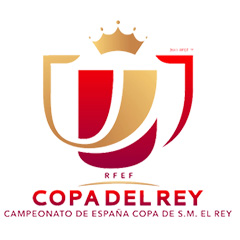 Eliminated from the Champions League quarter finals and unable to steal the title from Real Madrid, Barcelona arrives this Saturday night at the Vicente Calderón in order to face Deportivo Alavés for the Copa del Rey final. The catalans see in this Copa del Rey the only way of taking something positive from this season where they were unable of fulfilling any of their main objectives. Deportivo Alavés, on their turn, were the season’s surprise, being the recently-promoted team and managing to make a positive campaign, finishing in the top-half of the table and aiming here for a Europa League spot.

Barcelona won the two previous Copa del Rey titles and are the spanish team with more titles in the competition, 28 to be exact. The catalans were unable to fulfill any of their main objectives this season, failing to win the Champions League, eliminated in the quarter finals by Juventus, and finishing La Liga in the 2nd place, behind Real Madrid rivals. To reach this final, Barcelona took out teams like Hércules, Athletic Bilbao, Real Sociedad and Atlético Madrid, scoring 21 goals and conceding 8 in the process, all this in 8 matches. Barcelona are the team with most goals scored this season in the Europe’s 5 top leagues, and with this match being the last under Luis Enrique’s orders, the catalans shall enter here at maximum strength and will try to lift this title at any cost.

In their last games, the Blaugrana showed some defensive difficulties, specially in defending counter-attacks and in aerial duels. However, they compensate their defensive difficulties with a huge offensive capacity, being very dangerous in creating scoring chances using through balls and through individual skills, and very dangerous in attacking down the wings and in set pieces. Leo Messi is in an astonishing form, and with 35 goals scored in the spanish league he his the Europe’s 5 top leagues top scorer.

In their last 5 official games, Barcelona has a record of 5 victories. This sequence of results started with a 7-1 home victory over Osasuna. This result was followed by a 0-3 away win against Espanyol, a 4-1 home win over Villarreal, a 1-4 away victory against Las Palmas, and in their last clash, a 4-2 home win over Eibar. Rafinha and Aleix Vidal, both injured, Sergi Roberto and Luis Suárez, both suspended, are all out. Deportivo Alavés, on their turn, were able to achieve their first Copa del Rey final in all the club’s history, having to defeat Nàstic, Deportivo, AD Alcorcón and Celta de Vigo to get here. This was a rather positive season for a team that haven’t played in the spanish top tier since 2005/06, finishing in the 9th place of La Liga table and even took points from Barcelona, Atlético Madrid, Sevilla, among other great spanish clubs, during their campaign. The Babazorros have finished this season in good form, unbeatable in any of their last 7 matches, and arrive here with intentions of beating Barcelona, what wouldn’t be the first time this season.

This team is defensively well organized, since they were the 5th team with less conceded goals in La Liga. However, they show little offensive power, being the 4th team with less goals scored in the spanish league, with counter-attacks being their main offensive weapon. In general, they are an aggressive, play with width and attack mainly down the right. A win here would not only mean their first Copa del Rey trophy but also would mean their first presence in Europa League since 2002/03.

In their last 5 official matches, Deportivo Alavés has record of 3 victories and 2 defeats. This sequence of results started with a 0-0 home draw against Eibar. This result was followed by a 1-4 away win against Real Betis, a 1-0 home win over Athletic Bilbao, a 3-1 home victory over Celta de Vigo, and in their last clash, a 1-1 away draw against Leganés. Laguardia is out to injury.

Barcelona won 3 of their last 4 direct clashes in the last 10 years, losing the other one.

Barcelona were unable of fulfilling any of their main objectives this season and will try at all costs to lift this trophy in order to take something positive out of this season. Expect Barcelona to enter at full strength from the off, with Alavés being unable of stopping this huge offensive power.