According to the french sports magazine L’Equipe, the Portuguese international will no longer be a PSG player by the end of the season, with Valencia paying £31.00m.

According to L’Equipe, the two clubs have reached an agreement to seal the transfer of the former Benfica player, who has been in Spain since the start of the season on loan from the Gauls, on June 30. Gonçalo Guedes was transferred from Benfica to the Parisians on January 25 for £27.00m, plus “an additional £5.00m bonus, dependent on a future transfer”, which, according to L’Equipe, the Gauls have agreed with the Portuguese giants not having to pay. 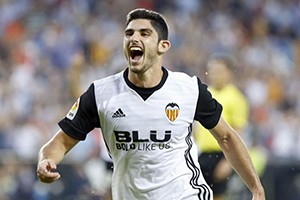 Guedes has turned out a fundamental piece in Valencia’s attack.

The 21 year old spent half a season with PSG, since he moved in the January transfer window, where he played 11 matches in the 2016/17 season, and 2 more matches this present season, before moving to Spain. For Los Che, the Portuguese international has scored three goals and made five assists in 12 matches in La Liga. Guedes has been one of the most prominent players in Valencia, who are third in the competition eight points behind leaders FC Barcelona, with his pace, intelligence and physical strength making him one of their deadliest weapon in counterattacking.

According to L’Equipe, the PSG decision of selling him has a lot to do with the issue of financial fair play, since last season the Gauls paid £199.80m for the Brazilian super star Neymar Jr. and £162.00m for the french youngster Mbappé.