A 3-0 win against Italy, at Santiago Bernabéu, represents a huge step towards the World Cup 2018 – and it’s going to be fun watching them there – just as significantly it may well represent another step towards Spain being Spain once again. In the final minutes of the game, the Bernabéu bounced as Isco had just been withdrawn to a huge ovation. The man they call “Magic” had twice bamboozled Marco Verratti, first rolling the ball between his legs, then flicking it over his head. Isco also scored twice to give Spain the lead, one with his right foot and another with his left, and Álvaro Morata added the third. 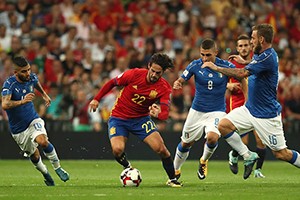 Spain dominated Italy almost from the start and, without a striker for most of the night, they sought control. The goals came naturally, and early. Only 12 minutes had gone when Isco lifted the Bernabéu with a free kick over the wall and into the net. It was neatly struck but Gianluigi Buffon was a little slow to react. After getting the lead, Spain saw Italy taking a step forward and pressing with four men, but it was Spain who had more ball possession. It was striking to see how often Spain – marked man to man – went long from goal-kicks, bypassing a depopulated midfield in search of the front three. But goal-kicks are one thing, open play another, and once the was rolling, Spain usually played their way through or round. This Spanish national team may be a different generation, another era, but the touch and control that defined them is still there. In Isco and Marco Asensio there is talent too, and of the purest kind.

Italy also had some goalscoring opportunities, particularly when they went wide, but were unfortunate in finding David De Gea in goal, who made a sharp save from Andrea Belotti’s header. Gerard Piqué was also close to extend the lead but headed over after a cross by Koke. After that, it didn’t take long for Spain to find the back of the net for the second time, with the second goal coming five minutes from half-time, with Isco receiving from Iniesta near the edge of the area. A swivel of the hips and he struck, left-footed, clean and low into a corner. Spain’s control was even more complete now, and Isco, in particular, was revelling in it. Olés rang round, accompanying every pass, many of them made by Isco, and when the exchanges were too fast too keep up, the Bernabéu broke into applause instead. 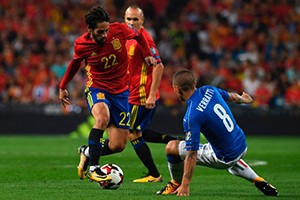 Has the second half began, De Gea made another good save, this time from Lorenzo Insigne, and then Belotti, dangerous throughout the game, headed over at the far post. For a moment the ball changed feet a little, but once Spain got it back, Isco drew roars as he slipped away from Verratti and found Carvajal dashing into the area. Buffon saved to avoid the third, but it came anyway. Not satisfied with one wonderful piece of skill, rolling the ball between Verratti’s legs, Isco left Verratti behind again soon after, flicking the ball over his head and releasing Morata, who had just came from the bench. However, this time it was Barzagli who ended the attack. Bu when Sergio Ramos burst out from his own area minutes later, marauding through the middle, he exchanged passes with Morata and the Chelsea striker finished well.